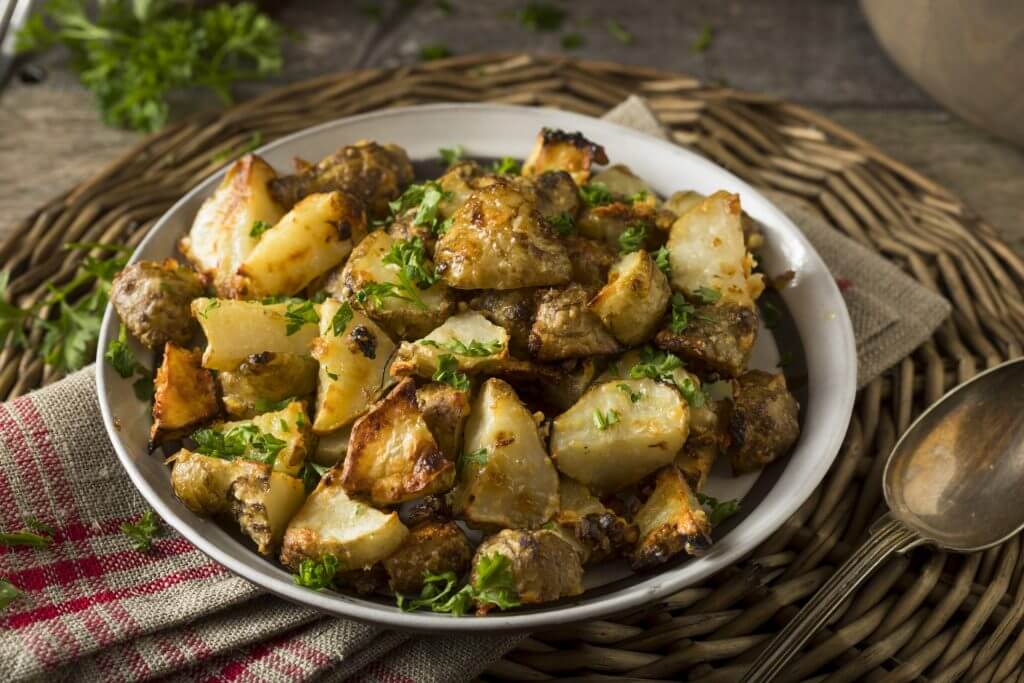 Jerusalem artichokes are starchy vegetables, like turnips or potatoes, but with a slightly sweet, nutty taste. They should be stored in the fridge, where they will keep for around eight to ten days. If you have found yourself with leftover Jerusalem artichokes and not sure what to do with them, this is the blog for you! Fortunately, cooking artichokes is quick and simple, and you can do this in a variety of ways.

Whilst the artichokes are cooking, pan fry chopped onion, garlic, and thyme (or rosemary and sage, if you prefer). Cook together for ten minutes until they have softened. Cut the artichokes in half and scoop out the insides with a spoon. Tip the flesh into the pan and give everything a good stir to combine.

Add stock, and simmer for around ten minutes. Add cream or milk to the mix and bring the soup to a boil. Blend the soup until smooth. Serve the soup with toasted hazelnuts and, if you like, a drizzle of truffle oil.

Peel the Jerusalem artichokes and potatoes, before cutting into thin slices. Pan fry chopped onion and garlic in a little olive oil until they start to soften. Season the mixture to taste.

Using half of the sliced vegetables, build up alternate layers of sliced Jerusalem artichoke and potato in the bottom of a baking dish. Spoon half of the onion mixture on top, and then repeat the process of layering vegetables and spooning over the onion. Pour enough stock in the dish to come halfway up the side, and sprinkle grated cheese over the top.

Cover the dish with foil and bake at 180 degrees for an hour. Remove the foil and cook for a further twenty minutes, or until the dish is golden brown and cooked through.

Peel and cut the Jerusalem artichokes into chunks and place them in a frying pan with a little oil. Fry the slices over a medium heat until they are golden brown on both sides. Add a couple of bay leaves, garlic cloves, a splash of white wine vinegar, and season to taste. Cook for twenty minutes with the lid on top until softened.

After twenty minutes, remove the lid and bay leaves. Continue cooking the slices for a couple of minutes to allow them to crisp up.

Roast the slices until crispy and tender in the middle. Meanwhile, cook a little chopped onion in a saucepan with olive oil, and cook gently until softened. Add the risotto rice to the pan and stir it around until the rice is coated in the oil and is starting to become translucent around the edges. Add white wine, and simmer until the rice has absorbed the wine. Add in a mix of white wine and stock into the pan a ladleful at a time and stir until absorbed.

Put the Jerusalem artichokes in a pan and cover with water. Heat the water over a medium heat and bring to a simmer. Add a pinch of salt, and cook the artichokes for an hour, or until they are tender. Drain the water off, then put the artichokes back in the pan with double cream. Bring to the boil, and let the mix reduce in volume slightly. Season to taste, and blend until smooth.

Please enter your post code bellow, and will notify you when we will deliver in your area.